Thanks to Tbird of Beyond the Valley of the Books for this awesome review.
So glad you liked Jacade and hope your readers do too.
Hold on for August and Book 2. It's gonna be so good!
BTVOTB on Facebook


I had no clue what I was getting into when I began reading but by the end I was addicted to this story. I will warn you that it does leave you in a pretty intense cliff hanger, one that made me want to scream and beg for this not to end here. The writing style is smooth and descriptive, with great character development, making the reader feel they are right there in the story experiencing every emotion that flows throughout the book.

Ivy has no idea who her parents are; she was just very thankful that Bernie and Helen took her in and raised her to become the woman she is today. Going back to work after a few months off, she is dealing with scar on her body that we still don’t know much about, a failed engagement to a man that was up to no good, and still dealing with body image issues from her time before she lost a lot of weight. She is now working for her Uncle in his plastic surgery office and will come face to face with Dr. Jordan, a man who will turn her world upside down and expose her to more than lust and love; he will be saving her from the dark world of gangs. 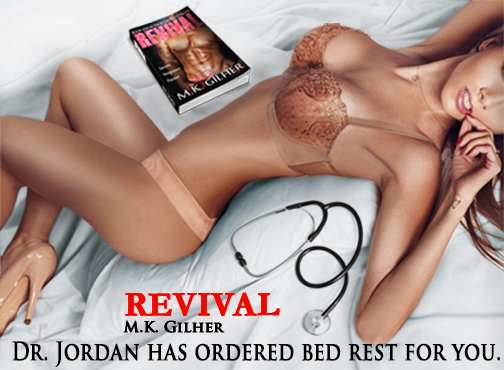 Dr. Jacade Jordan is one of the sexiest alpha men I have read about in a long while. While control is on his priority list, I love how he knows what Ivy needs before she even does and his love and desire for her goes back years before she even knew he was alive. He has a dark past, secrets he is keeping from Ivy that we will more than likely find out as the series goes on. One thing for you can count on is he is a walking, talking sex God who is protective of those he loves and goes after whatever he wants.

This story is laced with suspense, passion, thrill and humor. Ivy is a strong woman who says what she thinks even when the timing isn’t right. She goes through life with her devil and angel on her shoulders named Slut Ivy, who tends to lead her into situations that leave her breathless and in trouble and Feminist Ivy who fights hard to keep Ivy independent, virtuous and on the right path. Needless to say Feminist Ivy rarely wins the debate when Dr. Jordan is involved.

There are a lot of secrets in this story that we haven’t uncovered and the history of Ivy’s uncle will play a huge part in the future. I was sucked into this story from the elevator scene at the beginning till the very end where I was left screaming for more. The twists and turns the author has created in this plot are amazing and leave you thinking you can predict what is going to happen but more than likely you find you were totally wrong. It is an edge of the seat, change the panties often kind of story with two characters you can’t help but fall in love with. I have become a huge fan of this author and can hardly wait to read the rest of this series.

To get the inside scoop and earliest peeks, join MKG's Street Team

Angel Edits participates in affiliate programs to earn advertising fees by linking to Amazon and other book retailers.

StepSister Devotion I
by Eve Cates
Loved part one. Off to check out two.